Common Hall was held this year at Cutlers’ Hall, and was opened promptly by the Master at 6pm to the chimes of various clocks.

The Chairman of the Finance Committee, Renter Warden Simon Martin, gave a thorough and straightforward explanation of the Company’s finances, which are going in the right direction, after which the Honorary Secretary to the Trustees, Liveryman Alan Dodd gave an explanation of the Company’s Trusts and charitable activities. In particular he stressed the importance of Gift Aid and the extra funds that it raises for the Company, and pointed out that changes to the Gift Aid Small Donations Scheme (GASDS) would come into effect in April 2019, which would assist with its collection. He finished by asking everyone to support all three of the Company’s charities. 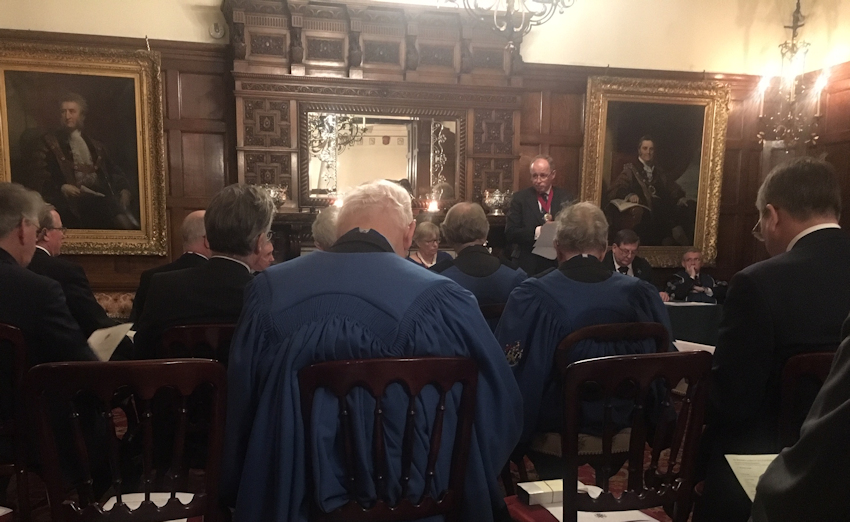 The Master started her Report by remembering the previous year and the Company’s 450th anniversary of the granting of our Royal Charter, and thanked all those who had taken part and had helped organise events throughout the year.  To great relief relief she was able to report that The Grievance Procedure had now been included in the Standing Orders.  She finished by particularly thanking the Clerk, John Brooks, and the Beadle, David Wylie, for all of their hard work.

Liveryman Alan Dodd gave an overview of the Charity of the Year, Red Balloon, and reminded the Livery that their Open Day would now take place in the afternoon of Thursday 21st March. He then read out the three nominations for next year’s Charity of the Year and opened the voting.

Liveryman Charles Collins was introduced by the Master as the new Court Assistant, after which the Upper Warden spoke briefly on the proposed Strategic Review 2020.

The Master advertised the vacancy for the Company’s Press Officer, from which Liveryman Alan Dodd was having to stand down following his appointment as Honorary Secretary to the Trustees. The room was filled with silence as all present considered this interesting opportunity, which was broken only by the Renter Warden’s suggestion that those present might also like to volunteer Liverymen who weren’t present. This prompted Past Master David Cole-Adams to speak about the Pan-Livery Communications initiative, which should be of benefit to the new Press Officer.

Liveryman David Williams announced the Company’s new Photography competition, which would cover all three of our crafts. He stated that the competition would be open to both digital and print photography, and that the closing date would be at the end of August, so that the winning images could be included in the Newsletter.

The Chairman of the Craft Committee, Court Assistant Chris Causer, spoke about the Triennial Awards 2020, and advised that Nomination Forms would be available from Summer 2019. He also advertised for a member of the Livery who would act as Curator and take over the task of sorting out the images of all past winners of the Triennial Awards.

Liveryman David Williams, who has edited the Newsletter for the past nine years, suggested that it might be prudent to move the publication date to the start of October so that it could include the Installation of the New Master and set out the events for their year. This was met with general approval … unlike his next suggestion that the Newsletter be renamed ‘The Annual Review’, which provoked a raised eyebrow from Past Master Roger Westbrook, who feared that it would then sound rather bureaucratic. The Renter Warden, with lawyerly concern, wanted to ensure who would be responsible for the production of the Newsletter, and it was agreed that this would remain the responsibility of the Upper Warden, who would then be installed as Master just before publication.

The Master led a final discussion regarding The White Book, to establish whether the time spent on its preparation was well spent, or whether some parts, for example addresses, could be dropped, which would also greatly reduce the number of pages. A surprising number of those present professed to regularly using it, and it was agreed that it should maintain its current format, including keeping it as a printed document, and not digital-only. Various questions about GDPR were raised, to which the Renter Warden stated that as the Company was a private members club, the GDPR committee had taken the view that The White Book was a legitimate use of personal details, and that he would be personally disappointed if members of the Livery were unable to share their details with each other.

As the clocks started to chime seven o’clock, The Master brought Common Hall to a close. 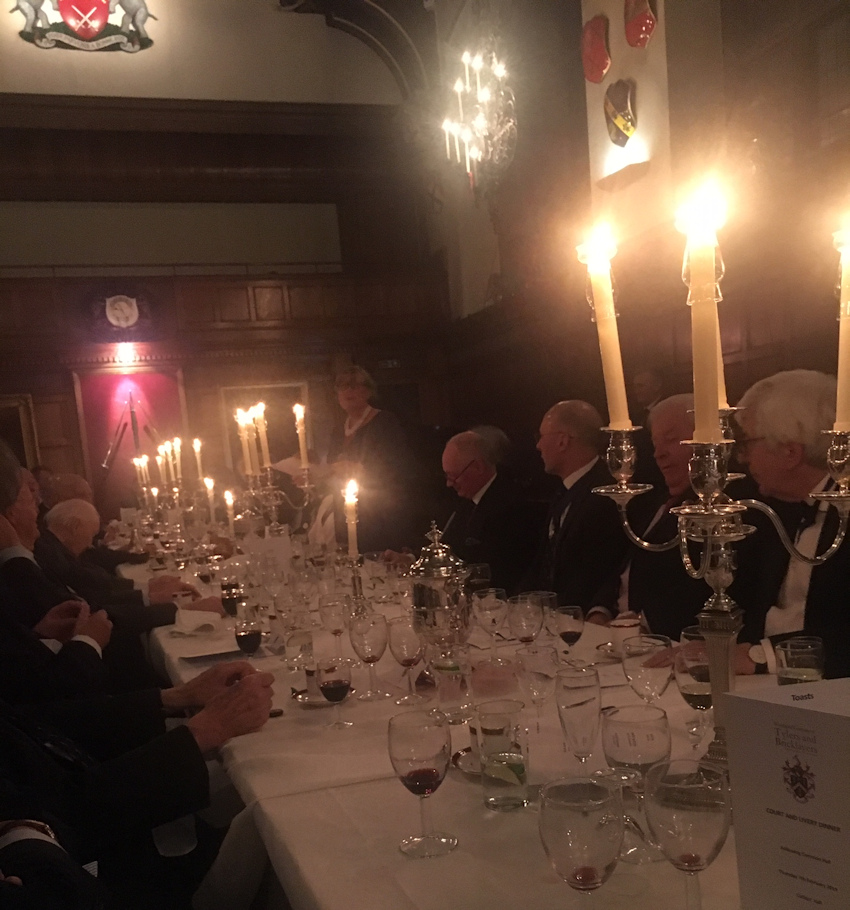 With the room quickly transformed, the Livery recovered on welcome glasses of the Company’s champagne and the Cutlers’ rather good sausages, before making their way up to the Hall. Red bricks, silver trowels, and gravel, arranged artistically on pieces of slate, made for unique table decorations.

Dinner started with a Trio of Smoked Fish accompanied by Petit Chablis Domaine d’Elise 2016, Lamb Shank accompanied by Château Tour St Bonnet 2010 and the last few bottles of our Château Sarget de Gruaud Larose 2008, and finished with Rhubarb & Ginger Crumble, and Graham's LBV 2011 port.  In her speech the Master announced that the winner of the vote to become our next Charity of the Year was Youthbuild.

Those who returned downstairs after dinner, were greeted with more drinks, some excellent cheese, and an interesting horn of rosemary snuff, which apparently the Cutlers have specially produced. 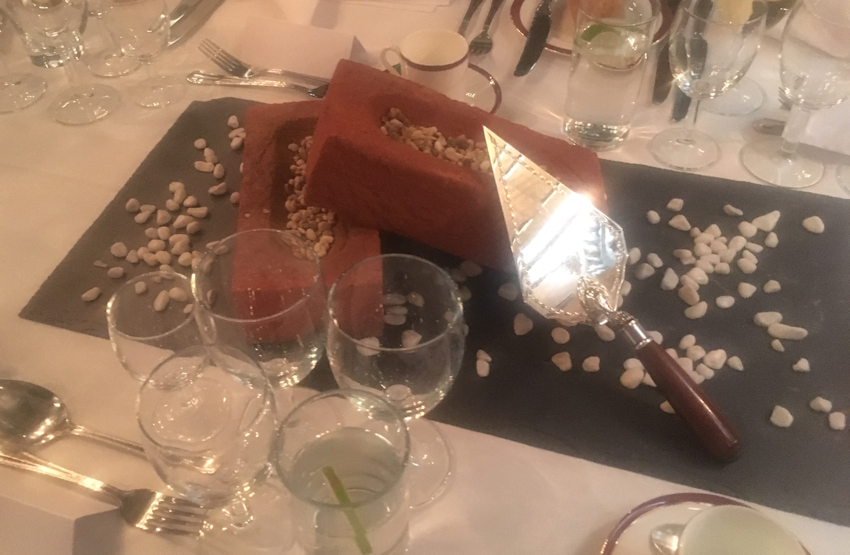