Every three years, the Company makes awards to projects which demonstrate excellence in the crafts of applied tiling or mosaics, roof tiling or slating and brickwork. To be eligible, a scheme - which may be newbuild or refurbishment - must be located within the area bounded by the M25 motorway and have been completed in the previous three years.

Nearly fifty nominations were received for the 2002 Awards - the highest number for many years - and the overall standard indicated that we would have a real competition on our hands. We were grateful to the Tile Association, the National Federation of Roofing Contractors and particularly to the Brick Development Association (our partners in the Better Brickwork Alliance) for their help in attracting such a strong field.

The three-stage judging process ensured that any scheme chosen as an award winner would be worthy of that honour. First, the Company's Craft Committee selected 17 of the 48 entries - spread across the three Award categories - to be visited for initial assessment. These visits, by teams of liverymen with construction expertise, were the second stage and resulted in a short list which the Judging Panel would visit to choose the Award winners.

The seventeen schemes chosen for assessment were:

These teams, like the final Judging Panel later, assessed each scheme on the quality of overall design, of workmanship and of materials, the degree of difficulty faced by the craftsmen and overall impression. They chose the following six schemes for the final short list:

The Judges who had kindly agreed to undertake the final phase of the judging process were: Bryan Jefferson CB, CBE, a former president of the RIBA and lately Architectural Advisor to the Secretary of State for Culture, Media and Sport; Bob Baldwin, President of the Guild of Bricklayers and a Freeman of the Company; Robert Howard, President of the Tile Association(now a liveryman oof the Company); Past Master Graham Bateman, Chairman of the Craft Committee and a fount of knowledge on roof tiling and slating, and the Awards Committee Chairman.

The quality of each of the short-listed schemes ensured that the Judges did not have an easy job. Nevertheless, they were unanimous in their choice of the three Award winners.

These were announced , following the presentation of the E and R Fuller Awards, at an impressively staged ceremony at The Painters' Hall on 9 July attended by nearly 100 members of the Company and guests. The Company's Award plaques(p), silver medals (m) and certificates (c) were presented to those associated with the winning schemes by The Master, Peter Wallis, and Sir John Egan, President of the Confederation of British Industry, who later gave a stimulating talk on future developments in the construction industry to round off the proceedings. 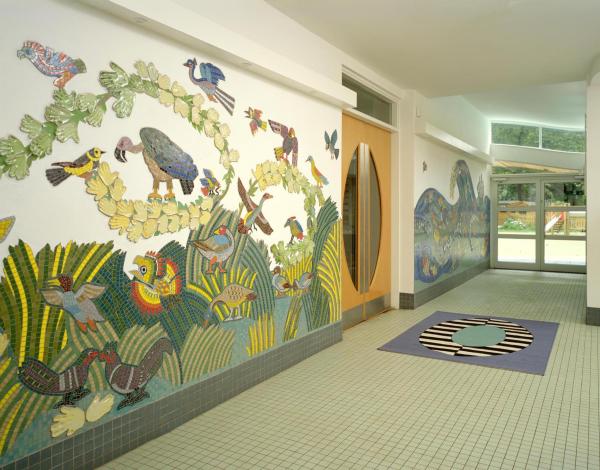 The 2002 Triennial Award for Excellence in Applied Tiling went to The mosaic murals at Thomas Coram Early Childhood Centre. There are two large mosaic murals in the Centre's reception area complemented by a series of mural vignettes. Glass mosaic is a notoriously difficult material to cut, especially into small pieces, so the cutting and fixing required great expertise. One of the large murals also incorporates tiles made from the handprints of children at the Centre . These were far thicker than the mosaics so their fixing called for particular care and skill. 'This was a superb job,' said the Judges 'and a pleasure to have seen'. 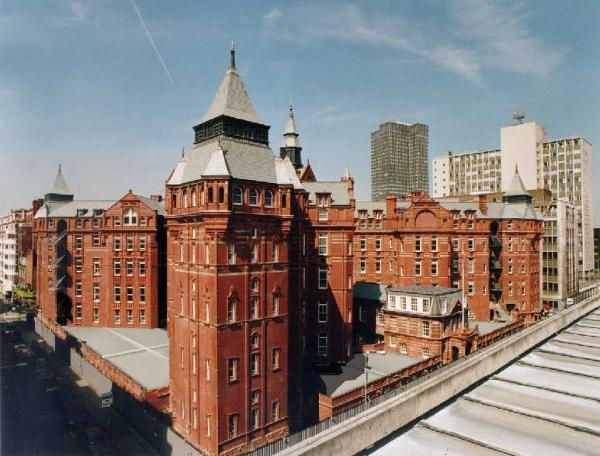 Though originally nominated for its brickwork, the judges made The 2002 Award for Excellence in Tile or Slate Roofing to the UCL Cruciform Building. The entire project was to convert a 19th century hospital, designed by Alfred Waterhouse, into a 21st century university facility. The roof slates and flax underlay were stripped from the building's four wings and central core, each with spires and ventilation flues. The original roof boarding was retained and replacement Vermont green slates laid in diminishing courses, with new decorative lead ridge vents. The Judges said 'This was clearly a challenging job, demanding - and receiving craftsmanship of the highest order as can be seen from the mitred and raking hips and valleys'. The remodelling and refurbishment of the entire Cruciform building was completed in around 18 months, a credit to all involved.

The 2002 Triennial Award for Excellence in Brickwork was the most hotly contested - it went to the Peabody Trust Development at Newington Green. Centrepiece of the scheme is a six-storey curved tower. Clad in a relatively economical brick, it displays exemplary control of gauge, plumb, level coursing and regular circular alignment. All the bricklayer's skill and experience is needed to achieve the sweet curves called for in any radial brickwork. Curved timber templates for the various radii and plumbing points around the circumference are needed in the total absence of the line and pins used in straight walling. 'The design was sophisticated and challenging' said the Judges ' and the end-product was delivered to an impressive standard - a worthy winner'. 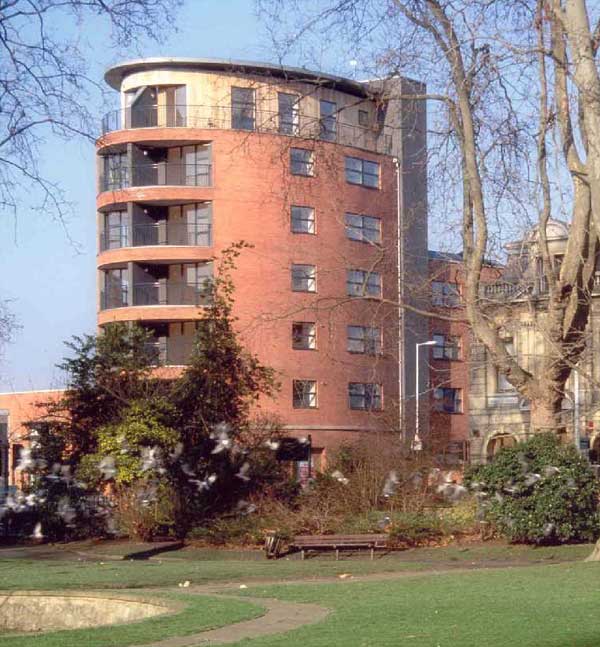 In addition to selecting winners in the three categories, the Judges made a Special Award for Craftsmanship to the Tile Arches at Southwark Cathedral Millennium Project. They had found it hard to believe that each of the tile arches - two flat and nineteen curved - had been built in situ. Every joint scrupulously radiates to the geometrical striking point of the arch shape. The high degree of accuracy in the setting of each tile could only have been achieved by a skilfull and experienced bricklayer working with the aid of a fine string line secured at the striking point some two metres below with which to check the alignment of the tile while it was being tapped solidly into place. 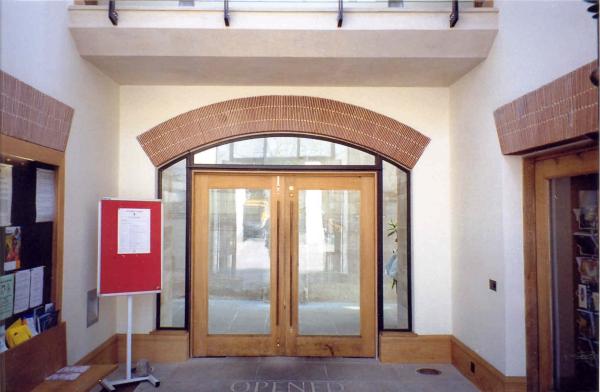 The next Triennial Awards, to be made in 2005, will be all the more successful if the number of nominations made by members of the Company matches, or even exceeds, those prompted by the allied trade bodies. If you spot a likely winner during the next two years don't assume that someone else will nominate it. Just ask me for a nomination form, fill in the details while they are fresh in your mind (and remember, each nomination must be accompanied by at least one photograph) and send it to me. It's never too early!